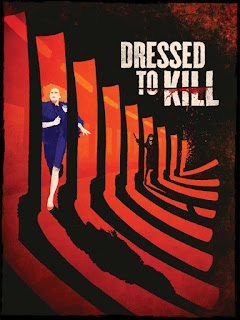 Dressed to Kill is a crash course in Brian De Palma's signature cinematic fetishes from a pleasantly sympathetic female point of view.

It's pretty easy to boil the movie down to Psycho with hints of Vertigo, but I've always been in favor of De Palma's Hitchcock influences. Saying that he was influenced by Hitchcock is like saying that Scarface was influenced by Howard Hawks: it's both obvious and unimportant; what matters is that he's learning lessons from the right filmmakers (plus, let's be honest, you know a De Palma when you see one in a different way from knowing a Hitchcock). What's more interesting is the way Dressed to Kill condenses such a large proportion of De Palma's visual cues. It's rife with point of view shots, split diopter shots, ghostly tracking shots, split screen; and wherever he gets these images from, he certainly succeeds in making them his own.

But far from the embodiment of style without substance that some may claim De Palma's filmography represents, with Dressed to Kill he uses this imagery in order to tell the story. There's a long section of the film with no dialogue, but it's easy to follow at both a narrative and character level (we understand both what's happening and why) because of what the camera chooses to show us. This is visual storytelling at its best, and if De Palma is as obsessed with Hitchcock as Scottie was with Madeleine, he uses that obsession to resuscitate an art which is often lost and forgotten in modern cinema.

The story that he uses these visual cues to tell is also one with a refreshingly sympathetic point of view. It opens looking through the eyes of a voluptuous Angie Dickinson, reminding us that women who aren't in their 20's need love too, and from there it resolutely retains its feminine perspective. The plot of a mysterious murderer with black leather gloves and a straight razor also plays explicitly on the tropes of the giallo, a genre with as celebrated a history of problematizing female sexuality as film noir, so while Nancy Allen's character complicates this issue and the representation of queer sexuality is less than favorable, this opening from the position of the woman is more than welcome.