Editing Sexual Violence into Coming of Age in Amer 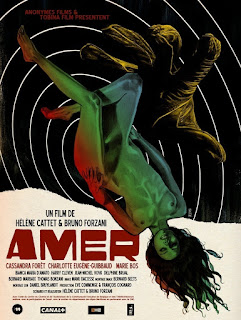 Like The Strange Color of Your Body’s Tears, Amer is an experimental take on the giallo which uses its genre influences in order to rise above them.

At its most basic level, it's a story about a girl growing up and becoming a woman: we see Ana, the protagonist, at three stages of her life (as a child, as an adolescent, and as an adult) and watch how she evolves through time. Thematically the film focuses primarily on the development of Ana's perception of sexuality and death, and how they eventually become strangely connected.

What really amazes me about both this and The Strange Color of Your Body’s Tears is the editing. It’s very in-your-face and obvious about its disregard for traditional editing methods, which can more often be a detriment than a strength without two key factors. The first and more simple of the two is execution: it’s easy to shirk convention, but it’s hard to do it well, since there aren’t any rules to follow. The second and more complicated is direction: even if unconventional editing is pulled off successfully, it has to serve a certain purpose.

Amer hits both balls out of the park. Aesthetically, the edits are gorgeous, from the three-way split screen of the opening credits, to the quickly cut extreme close-ups of naked flesh (which first symbolize death, then sexual awakening, and then death again). This return of the repressed (but as pleasure rather than trauma) at the narrative level is reproduced at the level of editing, with different shots presented in similar ways across the three acts of the story (death, then sexuality, then the sexuality of death). The fragmentation of the unconventional editing methods also reproduce Ana’s own struggle to put together the fragmented symbols in the world around her as she comes of age.

A fabulous experiment of editing, impressive both in its design and technique, used to explore a familiar coming of age arc in a new way.