The Origins of the Espionage Thriller in Fritz Lang's Spies 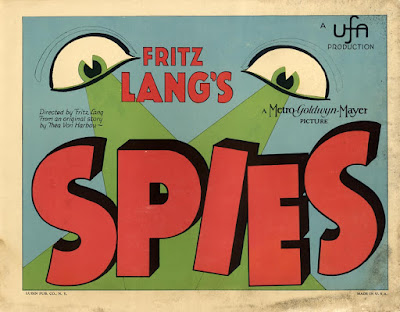 In the world of state secrets and government power, the enemy comes from within.

The secret service is disgraced after the theft of some important documents, and Burton/Miles Jason (whose name depends on his current secret identity) assigns Agent 326 the task of finding out who’s behind the robbery. Hard cut to "The Enemy" on an intertitle, wherein Haghi, a wealthy bank owner and criminal mastermind (Occupy Wall Street would have loved this movie), sends a beautiful female spy Sonja as a counter-agent. Her mission: to seduce a Russian intelligence officer and have him betray state secrets. But when she’s forced to seduce 326, she falls farther than she intends, and her betrayal makes its way back to Haghi. Together she and 326 must uncover Haghi’s secrets, but his dark allegiances run deeper than either of them could have imagined.

It’s incredible how well this still works considering it’s older than most human beings I know. Silent films can be hard to go back to as a modern audience, but Spies is still perfectly watchable. That might sound like damning with faint praise, but while this is currently my least favorite of Fritz Lang’s work, his craftsmanship is still simply exquisite.

The film opens with a montage setting up the premise—a spy steals important documents from the German government—but its significance in terms of concise effectiveness and narrative utility are outshone by its technical beauty. Lang knows how to keep the plot moving along at a brisk pace, and while the show is occasionally held up by people talking without any intertitles to translate what they're saying, once the plot gets going it’s impressively captivating for a film not far from its 90th birthday. 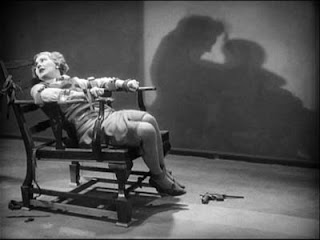 Part of what makes it so fascinating for me is how it shows the timelessness of certain spy movie tropes. The protagonist No. 326 is one shaken martini away from being 007, and his femme fatale nemesis could easily be mistaken for Pussy Galore. There’s even a bad guy who distinctly reminds me of Blofeld (sans the cat), and the climax involves a train in the most Goldfinger sense of a train.

Yet, unlike some of the Bonds (particularly Moore’s), these genre conventions are played perfectly straight. There’s no ironic winking or excessive explosions, and in place of Lang’s usual expressionist aesthetic is something much more realist in tone (with the exception of a few elongated silhouettes). Spies occupies a unique place in the espionage genre: serious enough to play it straight, but silly enough to romanticize the characters and avoid focusing on the mundane realities of espionage (e.g. paperwork, desk duties). Tonally somewhere in between Octopussy and Tinker Tailor Soldier Spy.

Undeniably impressive even by today's standards, but a little worse for wear.