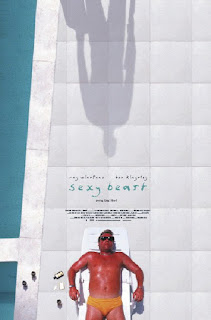 Just when I thought I'd seen it all (just kidding, obviously I haven't, I haven't even seen The Godfather Part II, it's a rhetorical device, try to keep up), Jonathan Glazer comes out with one of the most creative crime films of the new millennium. I went into Sexy Beast knowing nothing about it except that I absolutely loved Glazer's Under the Skin, and it put me so far on the edge of my seat wondering where it was going to go that I recommend anyone with any interest in gangster movies to check it out before reading anything else.

There's no big central twist or anything like that, it's just so well executed and such a slightly shifted portrayal of an otherwise played-out genre that it feels like it could go anywhere, so finding out where it does go is a real treat if you don't know ahead of time. There were several points where I thought it was going to be a heist movie about a heist that never happens. (Is it a spoiler that this isn't a heist movie without a heist in it? This is what I'm talking about.) This sounds like a cliche from back in the Siskel & Ebert days, but it really kept me guessing what was going to happen next.

Before I get into it, however, I do want to talk about Ben Kingsley's performance. There's a lot I like about it: it starts out very quiet and measured, and you can tell there's a maelstrom brewing just beneath the surface. He gives quick, curt, almost rudely brief responses to the other characters' questions, and he does it in such a precise way that you can see everything that he's holding back. But I also really don't like when he finally explodes. To me it just sounds like loud and sweary for loud and sweary's sake. He's more intimidating when he's quiet, and his loud outbursts signal an underlying impotence which is never developed. 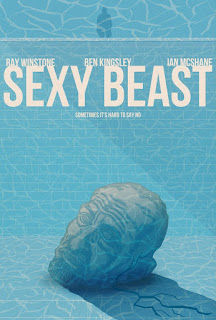 So, I don't know. This is just a surface problem for the most part, but it still bothered me. There were a lot of scenes for which I actually turned down the volume on my TV (I had it up because some of the accents here are a bit difficult). There's one great scene where the camera hides behind a corner, as if it's afraid of Kingsley, which is a much more interesting and subtle way to show how bonkers his character is than having him yell all the time. Ray Winstone gives a much more nuanced performance—as the protagonist he has to, of course, or the movie turns into a cartoon, but I'm surprised to see so much praise of Kingsley (who is still great in his own way), when I was more impressed by Winstone.

What I really loved about Sexy Beast, however, is rooted in its writing and editing. (Potential minor, vague spoilers? Wait, what are you still doing here? I told you to go watch the movie!) It does something which plenty of mysteries try to do, but few achieve on the same level. The movie will show us a scene, then after several minutes it will return to a crucial little detail that it left out previously. Like I said, a lot of mysteries do stuff like this; what makes Sexy Beast unique is how it does it. It uses the empty narrative space which is created when you cut on action. It takes advantage of the form of the cinematic medium. 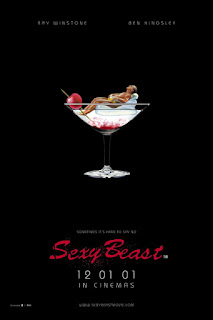 When we see someone get in a car, and then we see them get out of a car at their destination, we know what happened in the middle, but this knowledge rests on an assumption of continued action. Sexy Beast takes advantage of these assumptions by filling this negative space with a second climax which it will initially hide and return to later. And this is where the editing comes in: it's not just perfectly seamless in the way it cuts away from scenes to make them feel complete, but it's also perfectly punchy in the way these sequences are eventually reintroduced. It's so jarring and intrusive that it heightens the violence on screen and gives a surprising weight to a story which is actually pretty small (similar to what Quentin Tarantino did with Reservoir Dogs).

I'll definitely have to see this one again to be able to say for sure if it's truly the great movie I found it to be this time through. I was so intrigued by the novelty of the film's style and its reinvention of certain stale genre tropes that I didn't spend a lot of time reading into the characters. But while I can't quite say for certain yet, this is definitely a film that left a mark on me and one which I'm sure I'll be thinking about the next time I watch a new crime movie.