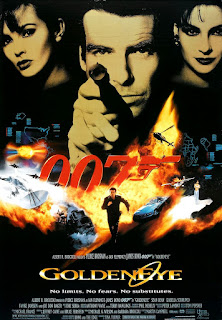 The one that introduced Judi Dench as M.

At the end of the 1980's, Bond was going through a bit of an identity crisis. The latest film, Licence to Kill, had pushed a lot of boundaries within the series, offering more intense action (earning it a 15 certificate in the UK, a rating in between the US PG-13 and R), while also cutting out some of the traditional Bond tropes and having 007 operate outside of MI6. However, it was one of the least financially successful films of the franchise, and following its release MGM and Eon Productions became enmeshed in a lengthy legal battle over distribution rights. When all was said and done, six years had passed—the longest ever break in the series—and both director John Glen (responsible for the last five films, the longest run for any director) and star Timothy Dalton had left. Bond needed to find a new path.

In comes a new director, a new team of writers, and a new star—Pierce Brosnan, for whom this was not the first encounter with the series (he had been considered as a replacement for Roger Moore, but his Remington Steele contract got in the way). The result of all this culminated in GoldenEye, a film which was both a return to the roots of the franchise and a reinvention of what came before it.

Previously, double-0 agents other than Bond himself had only been featured as outside players (usually dead before we met them); they were external forces used to push the plot forward, but never characters in their own right. GoldenEye introduces Sean Bean as Alec Trevelyan, Agent 006. He's the first MI6 agent other than Bond to feature prominently in the series, and he makes a great antagonist as the betrayed colleague and friend who turned to the enemy in a quest for power and vengeance.

GoldenEye also introduces a new M in the form of Dame Judi Dench. After the tragic passing of Bernard Lee, who played M in the first eleven Bond films (the longest term for any Bond actor other than Desmond Llewelyn as Q), the series had a hard time finding an adequate replacement. Rather than trying to return to anything like Lee's immortal performance, Dench bursts onto the screen with a new take on the character that would remain with the franchise for seven more installments. She plays M just as powerful and gruff and no-nonsense as Lee, but adds a self-awareness the series had generally lacked before this point. She confronts Bond with his own problematic nature, calling him a "sexist, misogynist dinosaur" in one of the most unforgettable scenes in the film. She takes the class and sophistication that had always characterized the best of the series and adds an intelligence to it, an understanding of its own faults, of its imperfections and shortcomings, that would eventually make it all the stronger for its inclusion.

This confrontation with the politics of 007 continues beyond the characters into the rest of the film's content. While the early Sean Connery Bond movies had investigated the geopolitical tensions of Cold War-era international relations, the Roger Moore and Timothy Dalton installments struggled to find such a compelling raison d'être. GoldenEye answers this question of what Bond should be about by attempting to examine the modernization taking place around the world in the 1990's and into the turn of the century. 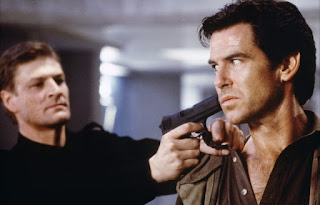 More than any Bond film since A View to a Kill (with its laughable inclusion of the microchip industry), GoldenEye is a film about the impact of the rapid progress of technology. At this time in history, the world was increasingly becoming a place where the idea of a man-made craft in outer space threatening the safety of the world below—an idea which seemed so silly in 1967's You Only Live Twice—was changing from fantasy to reality. The eponymous GoldenEye satellite is a space laser held over the Earth like a sword of Damocles, the constant threat of technological overreach literally perched above society.

For all its great ideas and innovations, GoldenEye isn't always the most compelling experience as a stand alone film. It offers plenty of action—including what is for my money one of the series's all-time best cold opens, with 00's 6 and 7 infiltrating a Russian base—but it frequently feels like the tether connecting this action back to the plot is stretched past its breaking point. And as much as it tries to take the series into a more contemporary world, it continues to rely on the outdated Cold War antagonism of Russian communists.

GoldenEye is a great installment in the Bond franchise, and it's also quite successful as an action movie in its own right. It's exciting and kinetic in a way that previous films rarely were, and it injects some much needed self-consciousness about the problems of the Bond character. So while it's not quite a perfect movie in its fractured relationship between action and plot, it's an important moment in the timeline of the Bond franchise, and one that sets the tone for the future of the series.